An 11-year-old boy drove his grandmother home in her Mercedes-Benz S-Class. The now healthy grandma told the story of courage in a Facebook post.

Usually children are punished for driving the family car when they don’t even have a driver’s license. But this one from West Wood, Georgia, becomes the internet darling after helping his grandmother get home.

The proud grandmother shared one Video from her grandson PJ, who drives the luxury car and calls the child “a lifesaver”.

Says Angela Brewer Laye, “I was doing my afternoon exercises a mile from my house when my blood sugar suddenly dropped below 40. I was basically on my knees and couldn’t walk. My grandson PJ was riding his 4-wheeler up and down the street and noticed my behavior. He immediately went into action. ”

The boy cycled to his grandmother’s house and took one of the cars in her garage that S-class, jumped behind the wheel of the luxury sedan without hesitation. Angela Brewer Laye says it was an absolute shock to find out her grandson knew how to drive.

“All of a sudden I saw my Mercedes-Benz coming up to me and guessing who was driving … Yes, PJ! Let me tell you this kid is ONLY 11 YEARS OLD !! And can drive better than his mother. ”

Well, we all hope “Mama” doesn’t read that far in Grandma’s Post.

Grandma asked him why the Benz and none of the other cars in the garage could have been smaller and easier to drive. The boy replied that he had got the first keys that he could get his hands on. 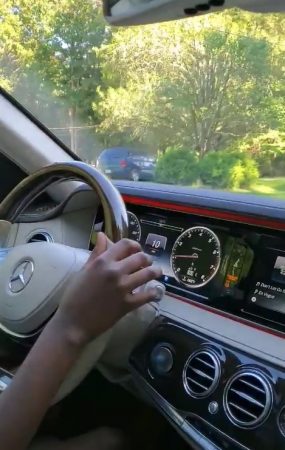 It is a crime all over the world to drive without a license. But the kid became an online sensation and the people who saw the video applauded the gesture of courage.

France sells 1/5 of the electric cars in Europe